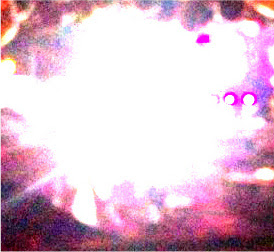 Support band Peggy Sue are from Brighton/London apparently and they were really very good, a foursome of dual guitar + vocals with a drummer and keyboard/bass.

Their double guitar tones sounded like the smell of smoke coming from a wonky brick chimney of a wonky pretty house in the middle of the woods where you drink out of tin cups sat on logs with dew-damp grass wetting your feet as you fill yourself with a cool spring air, wrapped in crochet.
(And I'm so envious of these people whose voices soar out effortlessly intertwined in harmony and sounding smooth and beautiful.)
I hope I see them again sometime soon.
Wild Flag themselves - I hadn't actually heard any of their music before going to see them, but obviously Sleater Kinney are one of my favourite bands of all time... so I figured it would be good.
I had made a mistake though, I thought it was Corin and Janet from Sleater Kinney.... so I was suprised to see it was Carrie and Janet, Carrie... I love them all, but Carrie does something to my every single sense that makes me completely weak, she is such an AMAZING musician to watch onstage!
They played a really great set, keyboard / 2 guitar / drums and vocals... high energy from start to end, at some points some Murray Street vibes crept across, a warm set.
I immediately had to buy the record, looking forward to listening to that over the weekend.