First gig of the year on Friday 20th January at Bristol County Sports Club in Bristol.. a weird but charming little venue in the city centre where a group of OAP's were having a birthday party at the same time as the gig was taking place in the next room... 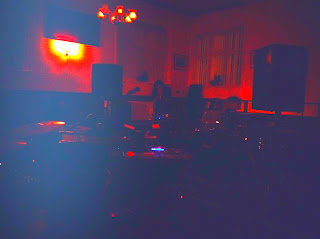 First up was Deej Dhariwal of Thought Forms playing a rare solo set (and it's always a treat for me to actually be able to WATCH him play...)
He started his set with harmonica sprawling out from a faraway porch, surrounded by long grass and travelling upriver to be blown across, sweet homely memories imprinted on the wind...
Improvising his way through the sound of a lonely sinking ship, keyboard drones and awesome NOISE, perched wailing on his chair at the back of the room behind a wall of gear belonging to the other bands.
And the familiar live track "Dunking" sounding nostalgically beautiful and tinged, more fluid than usual.
All I ever want from watching live music is for a switch in my mind to flick me into a different way of thought, more flowing and primal, and that is exactly what he did for me.
Looking forward to seeing lots more solo action from Deej this year. 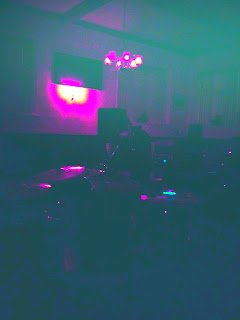 Next was the mythical Fairhorns (aka Matt Williams Matt Loveridge Team Brick Klad Hest whatever).
The first track he played was actually quite reminiscent of his band Beak>, the influence seeping in through krauty rhythms and hushed tones... moving with a keyboard that sounded like it had minature Tuuvan throat singers lodged inside of it whistling their shifts joyously through the room.
Mid set he played a piece of organ and blasting voice that was more Team Brick than Fairhorns, then again singing into headphones atop sampler, knowing.
He played one track from the great Fairhorns EP he made (that as yet hasn't seen the light of day?) and it's pixellated campfire cheer was warming. 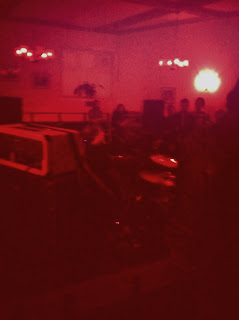 Big Naturals are on top of their game at the moment, Gareth and Jesse so tightly knit together whilst at the same time now adding more... freedom to what they do both alone together and when joined by others (Matt stood in with them for a while during the set).
Really looking forward to hearing their forthcoming record on Rocket Recordings, as well as the music they've been making with Prof from The Heads.